A Guide to New Zealand Volcanoes and Geothermal Sights

Posted on: June 8th, 2017 by About Australia Staff No Comments 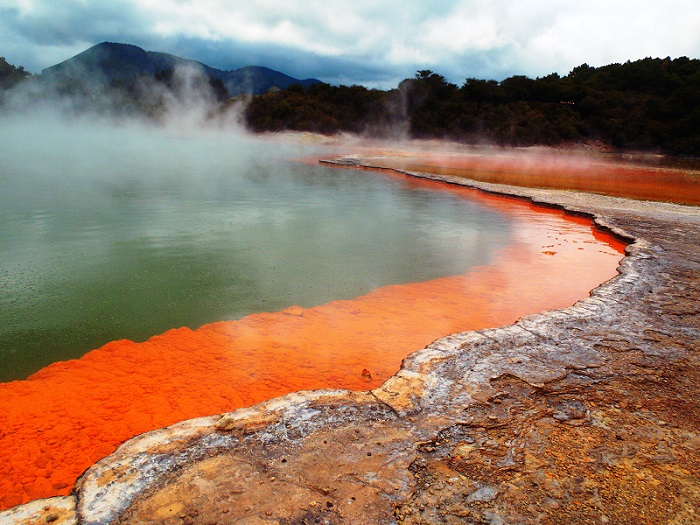 New Zealand is, pardon the pun, a hotbed of geothermal activity. It’s located in the “Ring of Fire”, an aptly named cluster of volcanic activity around the Pacific Ocean.

In fact, many of the islands surrounding New Zealand were formed from volcanoes.

Luckily, most of the New Zealand volcanoes and powerful cones haven’t erupted in hundreds or thousands of years. Shooting geysers, hot springs and sulfuric lakes are active reminders of the country’s volcanic history.

Check out our list of the best places to experience the sights, sounds and smells of New Zealand volcanoes and geothermal regions. 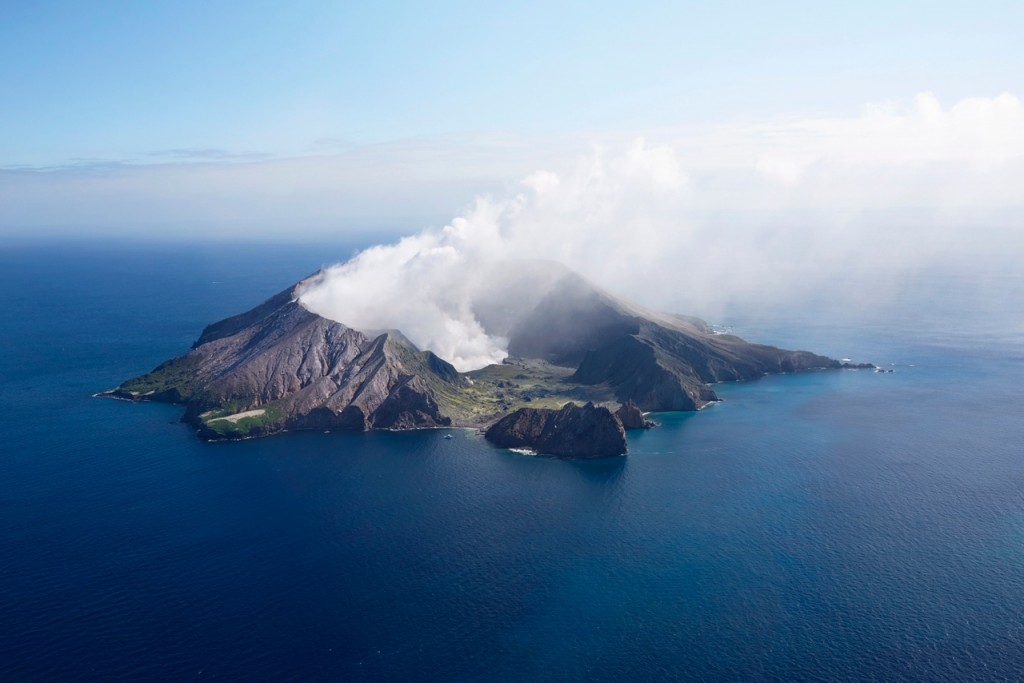 White Island is New Zealand’s most active volcano. Its peak rises more than 1,000 feet in the air, but much of the mountain is hidden below sea level, making this the largest volcano in New Zealand!

For an epic tour of White Island, you’ll arrive by helicopter and land on its surface. Walk the rugged surface and feel real volcanic rock beneath your feet.

White Island seems to live and breathe as a living being as steam rises and falls. Vents and cracks along the islands exterior hiss and release gases up to 1,000 degrees Fahrenheit!

You can get up close to the bubbling mud pits and steaming acid lakes that make up the island. 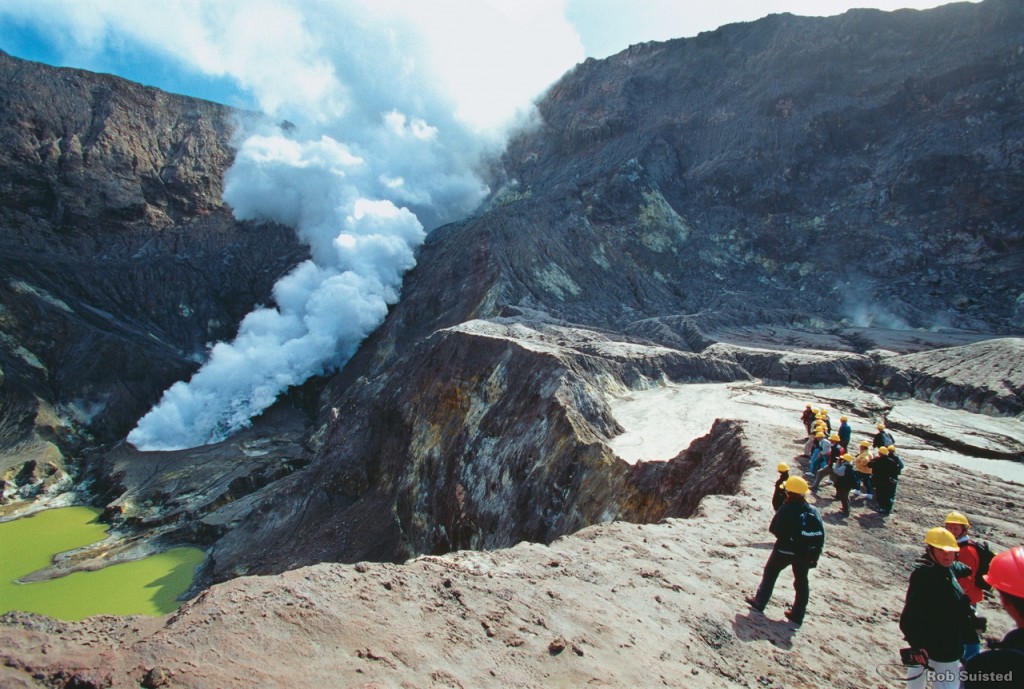 Like many New Zealand volcanoes and regions, White Island was originally named by the Maori. In Maori, the name for White Island is “Te Puia o Whakaari”, or “the dramatic volcano”.

No stranger to drama, this volcano wants to be seen and heard. Numerous small eruptions and a peak with seemingly constant cover from thick, white steam ensure that White Island stays on the minds of native Kiwi’s and tourists alike. 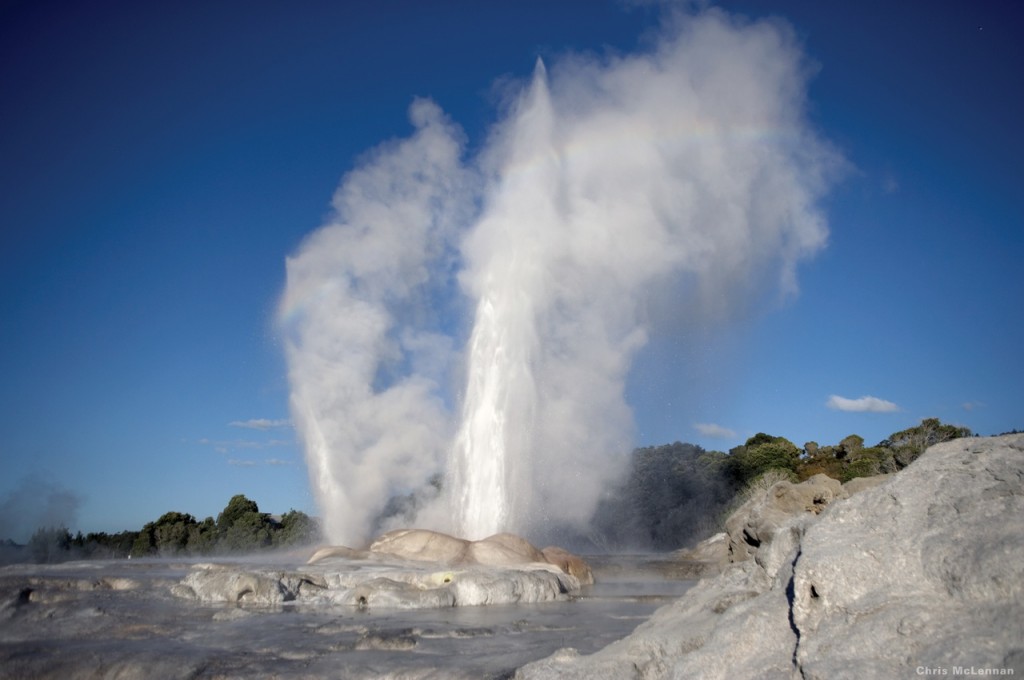 Just a skip away from the Bay of Plenty, Rotorua is known for its unique Maori culture and amazing hot springs and geysers.

You’ll know you’ve arrived in Rotorua when you sense that distinct smell of sulfur that permeates the air.

It might take some getting used to at first, but just think of it as the Earth’s magic at work! Besides, it’s a small price to pay for being in one of the most historically significant sites in all of New Zealand.

You’ll want to check out Te Puia,  an amazing geothermal wonderland that is home to the Maori Arts and Culture Institute.

Start your visit off with a visit to the largest active geyser in the Southern Hemisphere. Pohutu Geyser shoots steaming water more than 100 feet in to the air once or twice every single hour.

It’s a geyser so reliable you could almost set your watch to it.

Witness unique Maori cooking that utilizes Te Puia’s boiling springs. Known as hangi in Maori, meat and vegetables are placed in to baskets and lowered in to steaming water from the Earth which cooks it through. The Maori have used this method of cooking for centuries and it’s still used today.

Participate in a Te Puia Steambox Lunch to try for yourself the fantastic foods that this method produces. 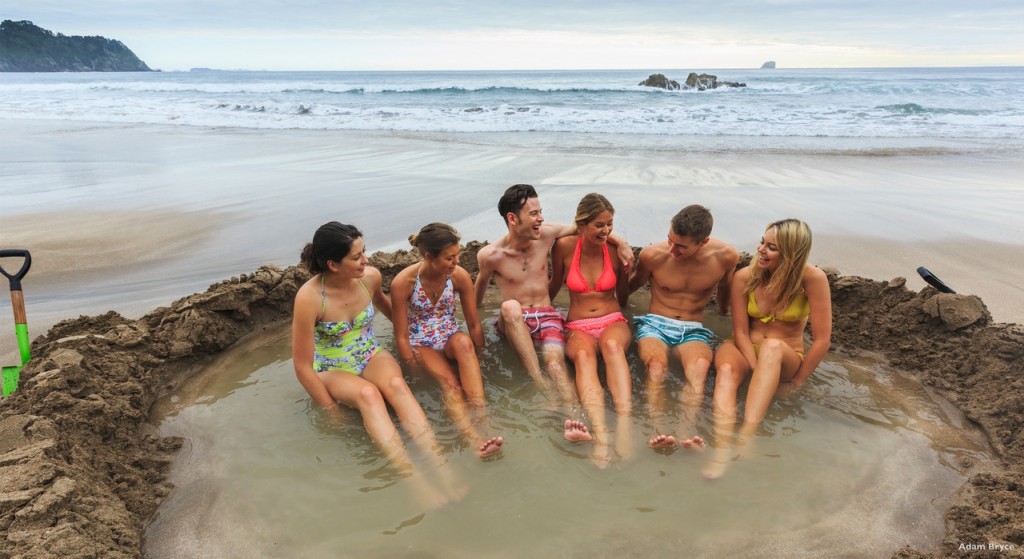 At first glance this may look like a regular beach. But bubbling just beneath the sand is naturally heated mineral water from springs below.

This makes Hot Water Beach a prime location to pull up, dig in and treat yourself to your own personal spay day. Dig a hole big enough for all of your friends, or keep it small for a solo soak.

You should plan on arriving to Hot Water Beach about 2 hours before or after low tide. This gives you a lot of easy digging area to hit the spa in no time.

Forgot to pack a shovel? Local cafes and shops within rent out digging implements if you didn’t pack a shovel in your carry-on

TIP: Always test the temperature of your newly-dug hot spring before getting in. As its name suggests, the water can get VERY HOT!

We gave Hot Water Beach a spot on our list of the most amazing beaches in New Zealand where you’ll find more of our favorites! 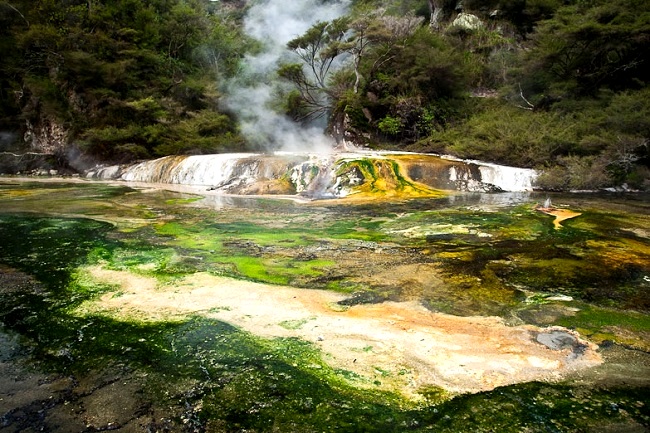 New Zealand is a new island nation. Its land isn’t even 10,000 years old yet! That’s just a blink of an eye in geologic terms.

The Waimangu Volcanic Valley was created just over 100 years ago from the eruption of Mount Tarawera. This eruption is New Zealand’s deadliest on record and remnants of the site’s violent history are still evident to this day.

Take a walk through Waimangu’s Volcanic Valley and you’ll see the rising steam of hot springs and crater lakes. The Emerald Pools are a stunning bright green water feature that sit atop a crater left by Tarawera’s eruption.

Many New Zealand volcanoes feature crater lakes and miniature ecosystems in the water atop extinct cones.

Be sure to check out Frying Pan Lake, the largest hot spring in the world.  You’ll be able hear the lake crack, sizzle, sputter and hiss from the geothermal heating below! 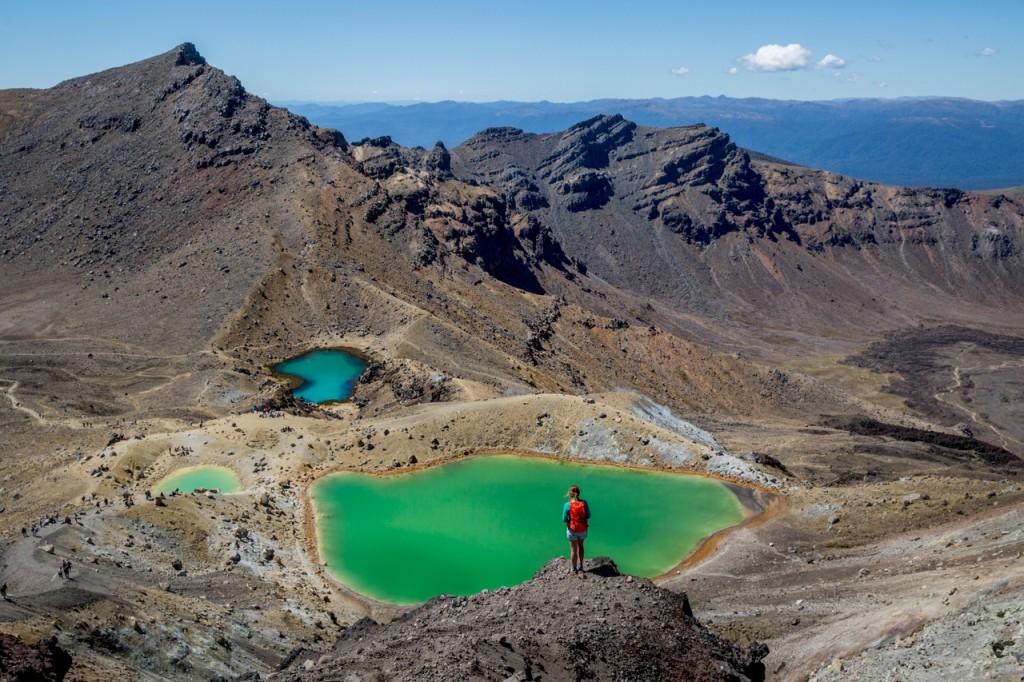 Take a trip to Mt. Doom and see how the real-life mountain of Mt. Ngaruhoe became the fictional volcano of Mordor in the Lord of the Rings films.

Tongariro National Park also provided the backdrop for many of the films iconic scenes. The amazing local landscape, incredible mountain peaks and lush forest is unlike any other.

It’s no wonder that director and native Kiwi Peter Jackson chose to film much of the movie in his home country.

Tongariro is also the home of many of New Zealand’s greatest walks and hiking tracks. The Tongariro Alpine Crossing and Northern Circuit are among the top 9 Great Walks in the country. You’ll see the park’s amazing plant and animal life, snow-capped mountain tops and the emerald pools of the park’s crater lakes.

Microscopic minerals suspended in the water give the lakes a super-saturated, amazing turquoise and blue color.

We have no doubt that you’ll find these great regions and New Zealand volcanoes just as amazing as we do.

Maybe you’re a geology super-fan who wants to tour the “Ring of Fire”. Or you’re a Lord of the Rings super-fan who just has to see Mt. Doom. Or maybe you just want to walk on a real volcano.

Either way, we can put together the perfect itinerary to see one or all of these amazing sights.

Posted on: May 15th, 2017 by About Australia Staff No Comments

Sometimes seeing a place in photos is all it takes to get yourself excited to take a trip. You browse through photos imagining yourself in far off places. But plain old photos are officially a thing of the past. These 360-degree images show off some of the most scenic places in New Zealand in the second best way possible – right behind seeing them live in person.

Be sure to click and drag around these breathtaking 360-degree photo-spheres and you’ll get a taste of what it’s like to be there yourself.

Zoom in close on the crater lakes at the foot of the mountain for a small look at how glacial minerals give the waters that beautiful sapphire look.

Tip: Want to see more amazing glacier-lakes? Jump right over to Franz-Josef Glacier and Fox Glacier for guided tours through these amazing natural wonders. You’ll fly in on a helicopter to hike these icy landscapes – truly incredible!

Waiheke is the second largest island in New Zealand, just behind Great Barrier Island. Horuhoru Rock sits just off the coast of Waiheke and is most notable for being a a safe nesting site for more than 2500 Australian gannets, a large seabird native to New Zealand. Access to Horuhoru Rock is limited, but we love the remoteness of this uninhabited isle! Not to mention that great panorama of the Hauraki Gulf.

If you look up and to the left of the island and the distance you can even see an Australian gannet swooping in to Horuhoru Rock!

This active volcanic vent is located in Tongariro National Park. Mt. Ngauruhoe breaths sulphurous gases in to the atmosphere from the cone. This volcano shot to worldwide stardom with the release of the Lord of the Rings films. Director Peter Jackson used Mt. Ngauruhoe to represent Mt. Doom in the films.

After you see Mt. Ngauruhoe, see the rest of Tongariro National Park. Go with a guide on a trek of the Tongariro Alpine Crossing – a hike you’ll never forget in one of the most beautiful places on Earth.

This park is the largest national park in New Zealand. Its giant fiords were carved out by glaciers little by little for hundreds of thousands of years. What’s left is an amazing natural wonderland that is pure New Zealand. Fiordland is consistently voted one of the best places to go in New Zealand. Milford and Doubtful Sound’s amazing landscapes are some of the top travel destinations in the world. Take a guided tour of Milford Track, one of New Zealand’s Great Walks.

About New Zealand Reviews
Rating of  Average of 4.86 on a total of 29 Ratings
John B
Outstanding trip and customer service

Wound up with an opportunity to take some vacation time on short notice. After reaching out with a little less than a month to go til departure, we were able to arrange the most active and(...)

Read More...
(...) exciting vacation we’ve ever done. Our agent, Ana, took care of everything and was a pleasure to work with. NZ is an amazing destination. Definitely recommend the Glowworm/Rotorua tour out of Auckland and the Doubtful Sound tour that runs out of Queenstown. Ana also took care of our arrangements for the second half of our trip in Australia. Definitely recommend visiting both if you have the time.

Lea Harris
Koda was super helpful in arranging a flight that suited my time frame and was a great price.
Denise Leaks
I had a fabulous time in New Zealand. My accommodations were very convenient and comfortable.. Since I was traveling solo it was important that I felt safe and I did.
Vergil Young
Amazing

Beautiful scenery everywhere you turn.
Wonderful friendly people always going out of their way to be helpful .