Posted on: July 19th, 2017 by About Australia Staff No Comments

When it comes to New Zealand wildlife, you might be thinking sheep, sheep and more sheep. And you wouldn’t be wrong, either! Until recently, New Zealand’s sheep-to-human ratio sat at about 22 sheep for every man, woman and child in the country.

That’s a lot of sweaters!

But that’s not all that the island nation has to offer. A diverse collection of unique animals make this coastal county their home. In fact, there wasn’t a single mammal to be found for millions of years before humans arrived. Instead, a plethora of wild bird species, reptiles and marine life thrived in the region.

This includes a lizard whose DNA goes back 200 million years, unchanged since the days it walked the land with dinosaurs.

What you won’t find though, are snakes. That’s right, not a single snake slithers around New Zealand. Great news for all the ophidiophobics out there (that means fear of snakes!).

We’ve rounded up a few of the most unique creatures you’ll find, so that your next trip will have you doing more than just counting sheep. 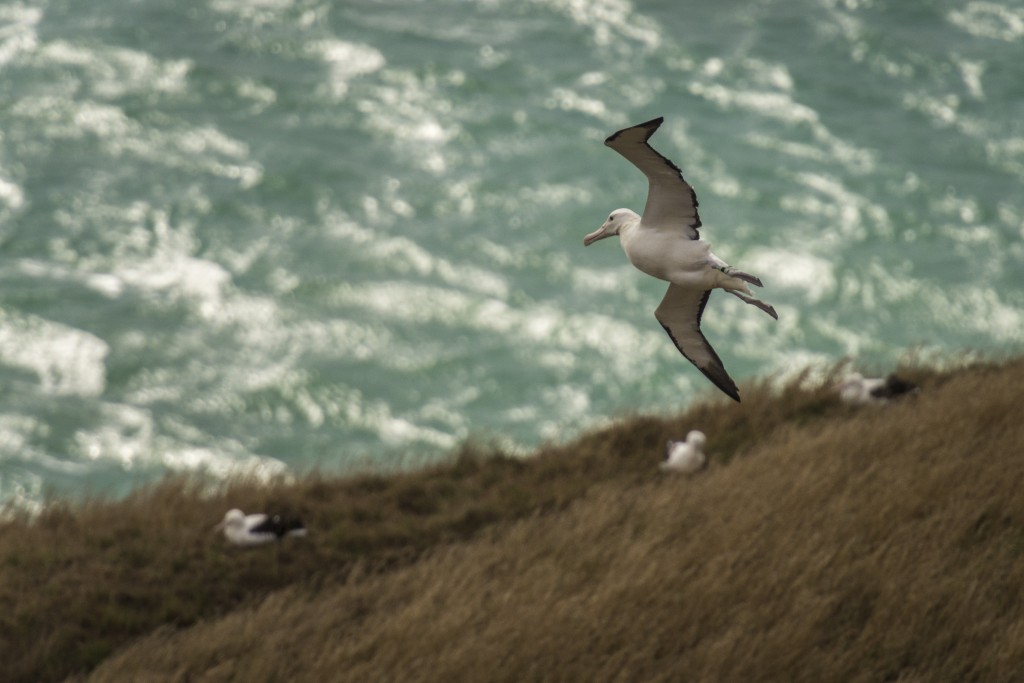 A storied history riddles this legendary bird’s past. Sailors once thought that seeing an albatross in the sky meant good luck. The giant bird was said to have carried the souls of dead sailors to protect the ship from danger. However, if one were to kill an albatross, certain doom would come to all aboard.

These days the albatross isn’t as rife with superstition, but the real facts behind the bird are just as interesting. They are among the largest seabirds on the planet. At their largest, their wings can span more 12 feet across – almost 6 times the average seagull!

The albatross is kind of like the drone of the bird-world. They use nearly autonomous, micro-wing movements to stay aloft using little to no effort. For the albatross, this makes flying a breeze.

They can even sleep while flying and have been known to stay out to sea for years, only returning to land to mate and feed their young. Scientists tracked an albatross recently circling the entire globe – more than 10,000 miles – in just 46 days.

Tip: Before you see an albatross in person, keep tabs on the newest addition to the Taiaroa Head albatross colony via live web-stream! This albatross chick hatched in late January and will remain until it’s old enough to fly away in September. The chick’s parents return from sea daily to feed their young. An amazing look at New Zealand wildlife up-close. 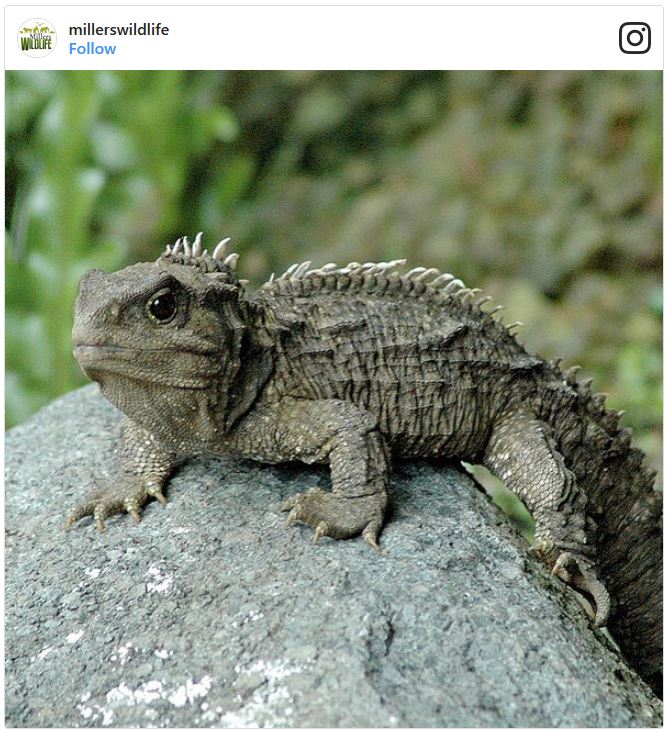 What has three eyes, zero ears and has called New Zealand home for more than 200 million years?

The tuatara, New Zealand’s “living dinosaur”, still carries the same DNA since it walked side-by-side actual with the famed mega-reptiles. A third-eye on top of it’s head (physical, not metaphorical) is thought to help produce vitamin D and regulate night and day cycles, but even scientists still don’t know what it’s really used for.

At the very least, it makes up for having no ears!

As mammals like wildcats and rodents were introduced to the mainland, tuataras became quick and easy prey and populations were decimated. These days they thrive solely on the islands off the New Zealand coast – like Jurassic Park, right in New Zealand.

However, being banished to an island turned out to be a good thing. Without any natural predators, the tuatara can live to be more than 100 years old. The benefits of island life.

If you thought you had to travel to the tropics to see parrots, think again. This New Zealand exclusive is the world’s only alpine parrot and is found only in select parts of the South Island. Like most parrots, the Kea is an intelligent bird. Researchers estimate that the Kea is as smart as a 4-year old – without ever having stepped foot in pre-school.

The Kea is notorious for it’s brash personality. They’ve developed almost non-existent boundaries and humans, a blessing and a curse that makes getting an up-close picture of the Kea possible, but also less savory encounters. Because of the bird’s hyper-curious nature and general trust around people, they have been known to peck and damage cars and rifle through bags and clothing. One Kea even made off with a tourist’s unguarded wallet in Fiordland National Park.

It’s no wonder they call these pick-pocketing parrots the “clowns of the mountain”.

You’ll want to see this beautiful bird in person and the best place to do it is in Fiordland. Take a nature cruise of Milford Sound for beautiful landscapes and wildlife spotting. Kea have been known to hang out in the parking lot of Milford Sound so be sure to keep an eye on your wallet! 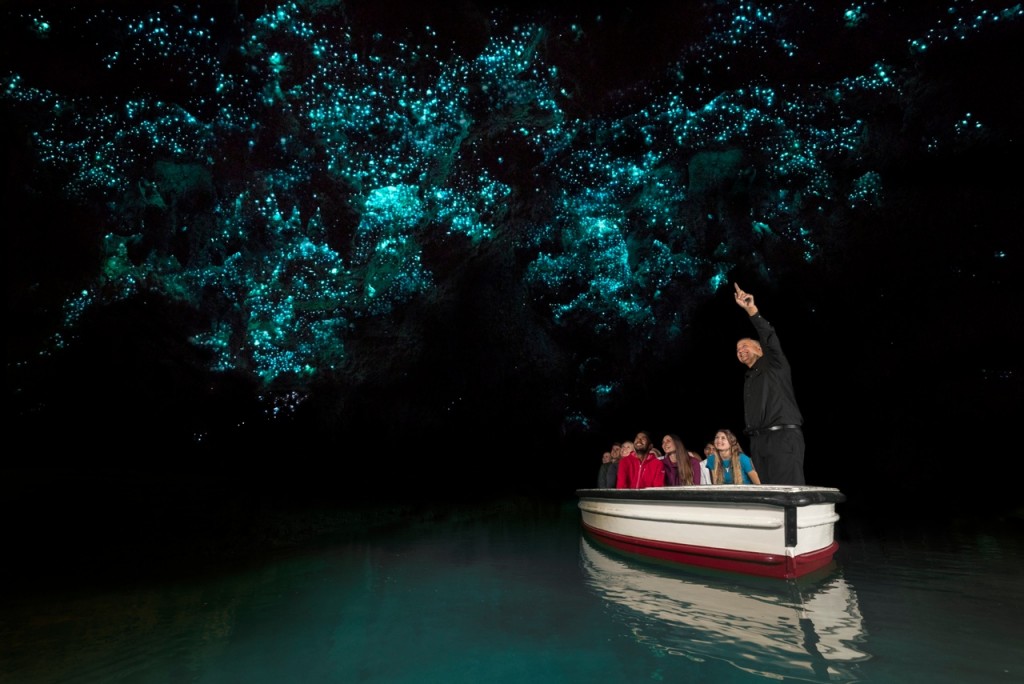 No other animal can stake the claim of attracting more than 400,000 visitors to New Zealand every year. In fact, the Waitomo Glowworm Caves are the most popular cave in all of Australasia, which includes New Zealand, Australia, New Guinea and other islands.

How do they do it?

Tourists flock to the Waitomo Caves to see the hypnotic, blueish glow that lights up the subterranean site. Millions of glowworms cover the cavernous interior and light up like blue fireflies during their feeding stage. The best part about seeing the glowworms is the silent, “black-water” river raft ride that you take to see them. You’ll float along the water beneath the canyon in total darkness, with only the star-like light of glowworms above.

These quirky marine-mammals are best known for their aerial-acrobatics. While all dolphins exhibit breaching behavior in order to breathe from their blowholes, dusky dolphins seem to perform out-of-water stunts like aerial jumps, spins, tail-over-head dives, barrel rolls and more – seemingly for no other reason than their own enjoyment! 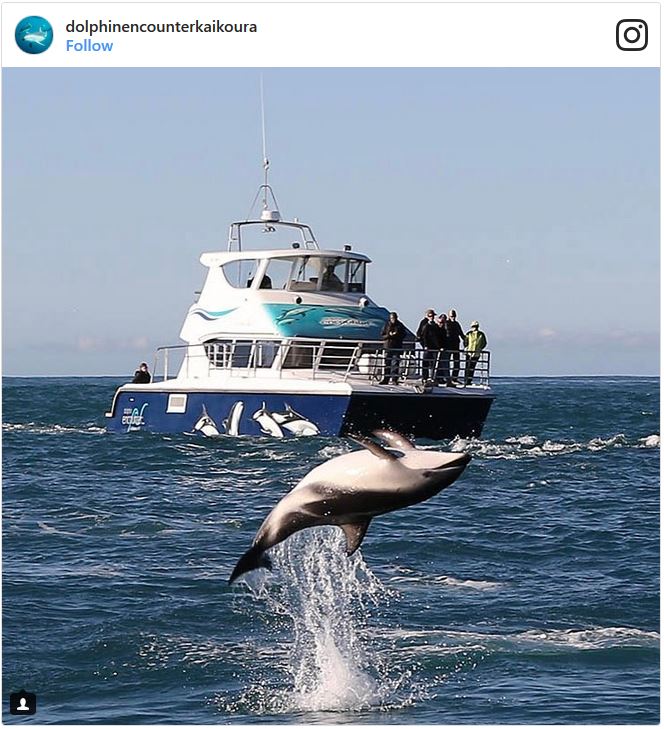 Dusky dolphins are found off the the south African coast, South America and many oceanic islands, but the largest concentrations are found all over New Zealand waters, including the Kaikoura Coast. Guided tours allow you to swim with these curious creatures in their natural environment.

Dusky dolphins are curious around humans and interaction with them is possible without the need for feeding, changing their environment or otherwise disrupting their natural habitat.

Tour-goers have reported dusky dolphins in pods numbering in the hundreds. The dolphins swim with and seem to mirror the behavior of humans (diving in as humans dive in) without being coaxed in to an encounter. 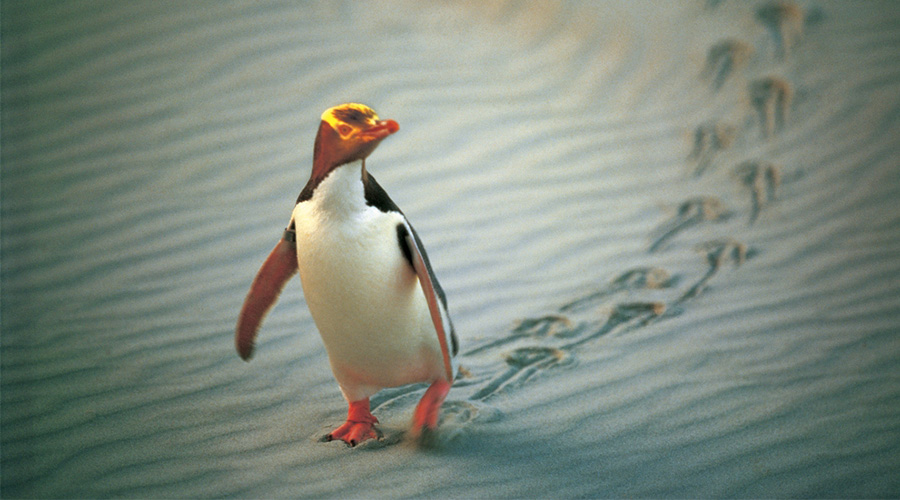 This tuxedoed New Zealand native is the rarest species of penguin in the entire world. The distinct, yellow banding around their eyes sets these quirky creatures apart from their Antarctic cousins to the south.

Yellow-eyed penguins, also known by their Maori name hoiho, are increasingly endangered. They generally breed on the South Island of New Zealand and habitats are found off the coast of Dunedin.

You can catch a glimpse of the rare land-bird with a cruise to Penguin Place wildlife refuge where conservation efforts are underway to increase the animals decreasing population. 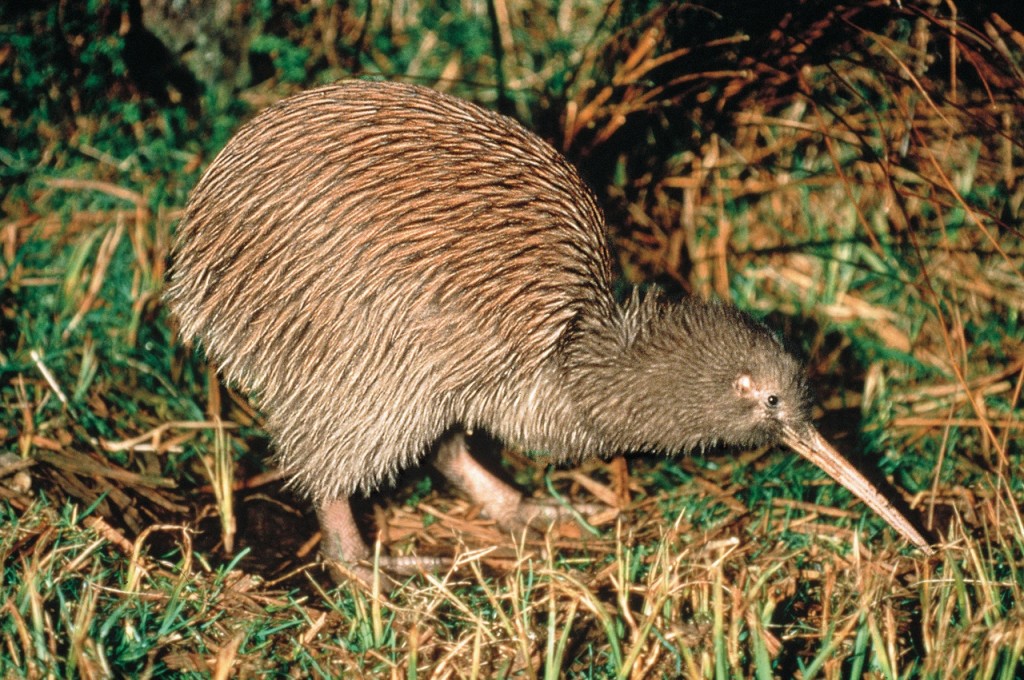 You didn’t think we’d get away without mentioning New Zealand’s most iconic animal, did you? This large, flightless bird is an icon that is inseparable from New Zealand. The word Kiwi is used as a term of endearment for native New Zealanders and even adorns the country’s $1 coin.

Not bad for a bird that can’t even fly.

The Kiwi’s arrival to the island nation remains sort of a mystery. Some say the bird descended from an ancestor capable of flight. Others say they arrived before New Zealand broke off from Australia millions of years ago. Essentially, just walking right over.

The Kiwi is a cherished part of New Zealand wildlife and culture, whichever way they arrived.

Unfortunately, the Kiwi is an increasingly endangered species, so they may be hard to spot in the wild. The best way to see a Kiwi up-close is through conservation projects and nature reserves, like Rainbow Springs Nature Park in Rotorua and Zealandia in Wellington.

We’ll set you up with the perfect trip for wildlife watching in beautiful New Zealand. Whether you’re Albatross-spotting off the coast of Dunedin or staring in awe at glowworms, you’ll be sure not to miss anything on your trip.

We’ll even send you to Fiordland National Park, but make sure to watch your valuables around the Kea!

About New Zealand Reviews
Rating of  Average of 4.86 on a total of 29 Ratings
Sandy Peterson
Best Trip Ever

Our trip to New Zealand was unbelievable. Everything was planned for us impeccably. Ana was a delight to work with. Every “t” was crossed and “I” dotted. We did not have one hiccup. Every(...)

Read More...
(...) reservation on our itinerary was made and we did not have one problem. We had an awesome tri and because it was planned out so extensively by Ana. Thank you. We would recommend you to anyone and everyone.
Eric Olberding
My wife and I had a wonderful trip to New Zealand.

About New Zealand did an excellent job of covering all the details which led to a very organized and stress free vacation! A couple of the IBIS hotels we stayed at were disappointing but on the(...)

Read More...
(...) flip side we received a nice surprise with lake view rooms in Taupo and Queenstown. We would highly recommend About New Zealand for booking your next trip to New Zealand.

It would actually please us greatly if our visit to Hobbiton might be the catalyst for others to visit the Shire. We’ve been Tolkien fans forever and lifting a pint in the Prancing Pony was one(...)